Terme di Saturnia: the Ultimate Guide to the perfect holiday!
Prices, what to see, what to eat, and where to sleep.

Tuscany is probably the most famous Italian region for Hot Springs. Not only because it has the highest number of hot springs in comparison with other Italian regions, 1/4 of the total present on the national territory, but also for the quality of its thermal waters and for the presence of many thermal baths still free and usable by all.

All you have to do is decide which type of spa you want to be pampered by. Of course, an important factor of choice is the budget you have available.

In this article we will talk about what, in our opinion, are among the Best Thermal Baths in Tuscany: the Terme di Saturnia, what are the prices, the services offered, where to sleep, what to eat and what to see in the surroundings of Saturnia. So you can organize a relaxing holiday or weekend in every aspect.

Terme di Saturnia has the advantage of offering solutions for all budgets, which can be combined with each other.

You can choose, in fact, to stay in the luxury of the Hotel Terme di Saturnia, to sleep elsewhere and go to the spa as day visitors or to camp and go to the free spa.

To get an overview of the best spas in Tuscany and then explore them individually you can read this article, if you want to know more about Terme di Saturnia, keep reading.

The Terme di Saturnia are certainly one of the most famous spas in Italy, they are located in the homonymous town, in the area of ​​the beautiful town of Manciano, in Tuscany.

Saturnia was already a tourist center, if it can be defined as such, in Roman times. Legend has it that it was the god Saturn who created them in a moment of anger; tired of the constant wars unleashed by man, he hurl lightning bolts on the earth, giving birth to the thermal spring.

If you decide not to stay at the Hotel Terme di Saturnia, there are many economic solutions in the surrounding area.

If, on the other hand, you are only doing a day trip and are not interested in the SPA treatment packages, you can choose between 3 different entrance tickets, which offer different services:

The various services listed above, such as the cot rental or bathrobe can be paid for individually upon entering the facility.

For those who stay inside the tree, the entrance to the Thermal Park is obviously free.

Inside the hotel of the Terme di Saturnia, there is also a golf course, a tennis court, and a fitness area, plus numerous services offered by the Spa.

You can book wellness packages or choose them individually, they are also an excellent idea to make a gift that will be certainly appreciated.

You can take advantage of the advice of the doctors always present in the structure, and keep in mind that some types of treatment are affiliated with the national health service.

The free natural hot spring of Saturnia is called “ Cascate del Mulino “, being free thermal baths they are naturally devoid of any type of service so get ready for a more spartan experience.

Bring a bathrobe to dry in the car but consider that you will smell of sulfur for at least a week (personal experience).

Right next to the free hot spring you’ll find a bar that offers drinks and simple food to be enjoyed near the brazier if the outside temperature is too cold. The free thermal baths of Saturnia are located on the SP10, a few minutes from the Spa.

Where to sleep near the Spa: Hotel in Saturnia

Of course, Hotel Terme di Saturnia is not one of the cheapest hotels around but there are many solutions to check out for those on a budget.

For example, you could decide to sleep in one of the structures, hotels, or b&bs, which are located near the Terme di Saturnia and pay only the daily entrance to the spa.

Alternatively you can sleep in a hotel in Saturnia and go to the nearby free spas, although it would be better to try both.

Or you can take a look at the list of the Hotels of Saturnia and its surroundings in the link below:

The Most Beautiful Hotels around Saturnia, Manciano

Saturnia and Surroundings: What to See?

The territory surrounding Saturnia has a very high density of architectural and landscape beauties to visit at least once in a lifetime.

The Necropolis of Puntone is located very close to Saturnia, in Pian di Cataverna. Once here you will have to follow the signs for Usi and for the necropolis of Pian di Palma and Puntone. It’s not that easy to find but it will pay off.

You will find yourself wandering among about twenty Etruscan tombs dating back to the period from the 7th to the 5th century. B.C. immersed in a very fascinating oak and sycamore wood.

It is not a place besieged by tourists, which makes it very quiet, immersed in an almost unreal atmosphere.

These are the three villages that you definitely shouldn’t miss during a visit to Tuscany; Pitigliano and Sorano are probably the most beautiful of the three but of course, it depends on your tastes and we recommend visiting them all.

What to see in Pitigliano

Coming from the street you will see it appear in all its magnificence, there seems to be no separation between the houses and the tuff cliff below.

The historic center is known as little Jerusalem, with its Jewish ghetto and synagogue carved into the tuff.

A few years ago the beautiful Luigi Faccini’s film bread of memory traces this history of integration and its dramatic epilogue.

In March the arrival of spring is celebrated with a characteristic bonfire in the square in which the winter is burned. Do not miss the Medici aqueduct and the Palazzo Fortezza Orsini.

In the surroundings, The Vie Cave di Pitigliano , also called “tagliate” or “cavoni”, the suggestive roads dug by the Etruscans in the tufa rock to connect the settlements of Pitigliano, Sorano, and Sovana.

Some of these have walls up to 20 meters high , are up to 1 km long, up to 3 meters wide and often intersect with Etruscan necropolises.

Not far away the beautiful village of Sorano, also dug into the tuff. You should not miss a nice walk through the streets of the historic center. A few kilometers from the town are the homonymous thermal baths: the Terme di Sorano.

The Tarot Garden is an artistic park located in Garavicchio, in the municipality of Capalbio, in the province of Grosseto.

It is located not far from the Terme di Saturnia and is a must-see destination for spending a different day visiting something not so common in Italy.

The Tarot Garden was designed by the French-American artist Niki de Saint Phalle. As the name suggests, it is a tarot theme park, more specifically the creation of the statues was inspired by the 22 major arcana of the tarot.

The statues, up to 15 meters high, are made of different and original materials; ceramics, glass, mirrors, steel, and concrete. A place as artistic as it is a fairytale.

It is possible to book guided tours only in the winter period but not during the Christmas period, from December 23 to January 7.

During the months of November, December, January, February and March, every first Saturday of the month the entrance to the Tarot Garden is free.

The Isola del Giglio needs no introduction, it is one of the pearls of the Tuscan Archipelago , facing the Monte Argentario . Despite being small in size and very touristy, most of the island is still unspoiled.

But during the colder months, the charm of Giglio is even more pronounced, with fewer people around, almost only the few inhabitants of the island (about 1400 people scattered throughout the island) you will have the many panoramic pedestrian paths available just for you.

Arrive by ferry at Giglio Porto, the only port on Giglio Island, and reach Giglio Castello, a medieval village located at the highest point of the island.

Other municipalities around Saturnia are Porto Ercole and Montemerano. Montemerano is a small fraction of the municipality of Manciano, about 10 kilometers from Saturnia. Porto Ercole, on the other hand, is a typical maritime port with its characteristic smells and sounds.

Restaurants in Saturnia and surroundings: what to taste

The culinary tradition of this area is based on simple and peasant ingredients. Among the typical dishes that you have to taste in Saturnia and its surroundings are wild boar bread gnocchi, crostini with cauliflower.

Try the Milleccia di Pitigliano, a focaccia with ricotta and vin santo, sweet fried or baked tortelli (puff pastry stuffed with ricotta and cinnamon, soaked with alchermes), the tozzetti, biscuits with hazelnut flavor and candied fruit.

The area around Saturnia, in particular the village of Pitigliano, has been inhabited for centuries by a large Jewish community that has greatly influenced the local cuisine.

Among the typical dishes, in fact, there is Esau’s soup with lentils and meatballs; calzonicchi (brain tortelli); tegamata, a dish based on beef left to soak in wine and potatoes, and much more.

Read the Reviews of the Best Restaurant Around Saturnia

This article is part of our series about The Best Thermal Baths in Tuscany, Italy. Read also:

The Best Hot Springs Around the World 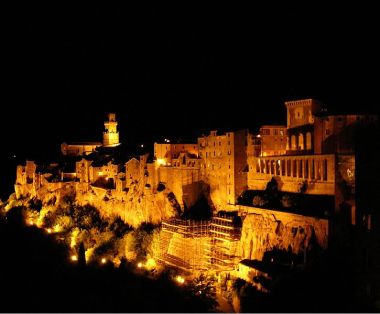